A place for book reviews + musings.

When I saw that T.Kingfisher (better known as Ursula Vernon) had released another book in her Saint of Steel series (go here for my review of her first novel, Paladin’s Grace) I knew I had to read it. There’s something about reading a more mature romance, one filled with honest, unabashed conversations and (quite frankly) hilarious scenes that made me fall in love with this series all over again. Paladin’s Strength doesn’t disappoint.

In this second installation we follow two protagonists: the first being Istvhan, one of the Paladin’s of the dead god as he tracks the murderous and downright supernaturally creepy clay golems (the ‘Smooth Men’ mentioned in Paladin’s Grace) across the continent. The other is a newer addition to the Saint of Steel series – Clara, a nun of St.Ursa, desperate to track down a wagon of fellow sisters who have been kidnapped.

The novel opens as Clara is delivered to Istvhan’s tent as a form of payment to settle a dispute. Together, Clara and Istvhan set across the country, both trying to focus on their own missions and with their own secrets to keep. Of course, mild spoiler alert, those secrets don’t stay such for long even if the entire romantic subplot is incredibly slow-burn (I mean, seriously. You’ll have to be very patient with this one). As a pair, the two have an undeniable chemistry. Their growing romantic relationship as the book progresses is both full of sexual tension (Istvhan’s berating inner monologues never failed to make me laugh), and genuine depth of feeling. It was refreshing too, for things like consent to be so openly discussed and considered in a romance novel, especially by the male protagonist.

“He liked her. He liked the way she carried herself. He’d only met a few women of her size before, and mostly they tried to downplay it.
[…]
Clara walked like she was taller than everyone else and knew it and if anyone cared, be damned to them.”

As individuals, they both drew me in equally. Both Clara and Istvhan are each troubled in their own way, each seeking a way through a world that is perhaps not built for people as big or as different as they are. Indeed, there are many scenes where these characters are made to seem larger than they are in towns and villages that aren’t suited to them, cramped in chairs or in rooms that won’t fit their frames. They are outsiders, driven by purpose and drawn together by fate and mutual understanding.

As I’ve mentioned before, I adore novels which delve into exploring theology and religious matters. As a nun and paladin of absent gods, I really enjoyed getting to see how Clara (imbued with the “gift” of being a werebear), and Istvhan (a berserker) coped with forging their own paths in the wake of this religious absence in a society that would either be wary of them, or downright reject them.

Kingfisher writes mature romance fantastically well. Whilst there are hilarious, awkward moments that would make anyone blush, there is a sense of inner understanding and maturity that comes with this relationship. Moreover, as I read on, I was delighted to explore more of the world these characters live in. One of Kingfisher’s greatest strengths, and one of the things I enjoyed most about this novel, is her worldbuilding: how magic works, the cultures of different towns, how different faiths are viewed and exist. The mystery of the Smooth Men sought in this novel is well and truly solved with grizzly finds and a climatic, breath-taking bunch of chapters towards the very end. But that is only a small part of what is a deep, many-layered, romantic adventure novel with many moving parts.

“In life, if you were careful, there were simply not that many times when you absolutely, positively, had to turn into a bear.”

There are many wonderful scenes in this book (wait for the scene where Clara turns into a bear for the first time!), discussions that evoke pathos, scenes that had me covering my face with second-hand embarrassment, and oh my the puns. The supporting characters are interesting too, and I cannot wait to see if Kingfisher revisits them in their third book (I shan’t give too much away).

Final verdict:
Much like Paladin’s Grace, this second novel Paladin’s Strength is funny and delightfully heartwarming, filled to the brim with rich characters and a whole lot of intriguing places to explore. It works well as a standalone book, but I’d recommend reading this as a second book in the Saint of Steel series. It gives you a greater sense of where the paladins slot into this wider world, and has you pondering just what might be next in store for these servants of a dead god.

Find this book, and give it a read. I promise you, you won’t be disappointed.

One thought on “Book Review: Paladin’s Strength by T.Kingfisher” 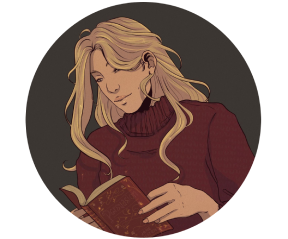 Hi! I’m Lu, and I love reading sci-fi, fantasy, and historical fiction books. Expect a few ARCs, some mild spoilers, and a lot of flailing. Pull up a seat and settle in.

I mostly post reviews, with some book tags thrown in. Feel free to contact me to request a review.